Today – Students completed bell work #18, discussed final preparations for tomorrow’s quiz, and took a peer’s practice quiz over “The Cask of Amontillado” focusing upon the who, what, where, when, why, and how.  Briefly we discussed TWA #2 that is due Tuesday.

See the slides below for today’s lesson plan and homework.  Also, the exposition to Poe’s “The Cask of Amontillado” has been rewritten to remove the difficult vocabulary, replaced with synonyms. 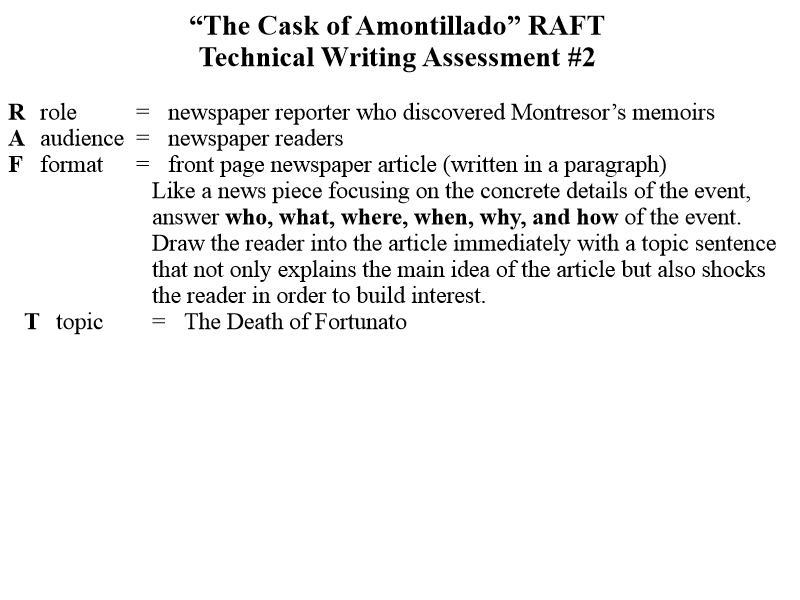 The Cask of Amontillado by Edgar Allen Poe

THE THOUSAND INJURIES of Fortunato I had taken as I best could, but when he ventured upon insult I vowed revenge. You, who so well know the nature of my soul, will not suppose, however, that I gave remark to a threat. At length I would be avenged; this was a point definitely, settled—but the very definitiveness with which it was resolved excluded the idea of risk. I must not only punish but punish with liberty. A wrong is unrestored when retribution overtakes its restorer. It is equally out of balance when the avenger fails to make himself felt as such to him who has done the wrong.

It must be understood that neither by word nor deed had I given Fortunato cause to doubt my good will. I continued, as was my custom to smile in his face, and he did not perceive that my smile now was at the thought of his sacrifice.

He had a weak point—this Fortunato—although in other regards he was a man to be respected and even feared. He prided himself on his expertise in wine. Few Italians have the true expert spirit. For the most part their enthusiasm is adopted to suit the time and opportunity, to practise deception upon the British and Austrian millionaires. In painting and gemology, Fortunato, like his countrymen, was a quack, but in the matter of old wines he was sincere. In this respect I did not differ from him materially;—I was skilful in the Italian vintages myself, and bought largely whenever I could.